From the News & Observer:

The former Senate majority leader has been at Walter Reed Army Medical Center in Washington since last week when he experienced a "sharply" elevated heart rate in the middle of the night, a statement from his law firm Alston and Bird said Friday.

Doctors determined the 85-year-old Dole's heart is fine, but surgeons performed several procedures on his left leg that had open sores. Dole's legs are healing properly and a skin graft is planned for Monday if Dole's progress continues at its current pace, according to the law firm's statement.

The medical attention "has been painful, but I think I will be fine," Dole said in the statement.

"I am recovering nicely thanks to the great doctors, nurses and staff at Walter Reed. I have been coming to Walter Reed for over 40 years and I hope to be out by my birthday, July 22," Dole said in a statement.

So Bob Dole, that poor deluded fool, is obviously doomed.

Good luck, sir. You're going to need it in the hellhole that is socialized medicine.

What America Hating Elitist Said This About St. Sarah?

In television interviews she was out of her depth in a shallow pool. She was limited in her ability to explain and defend her positions, and sometimes in knowing them. She couldn't say what she read because she didn't read anything. She was utterly unconcerned by all this and seemed in fact rather proud of it: It was evidence of her authenticity. She experienced criticism as both partisan and cruel because she could see no truth in any of it. She wasn't thoughtful enough to know she wasn't thoughtful enough. Her presentation up to the end has been scattered, illogical, manipulative and self-referential to the point of self-reverence. "I'm not wired that way," "I'm not a quitter," "I'm standing up for our values." I'm, I'm, I'm.

In another age it might not have been terrible, but here and now it was actually rather horrifying.

No fair peeking...so who said it? 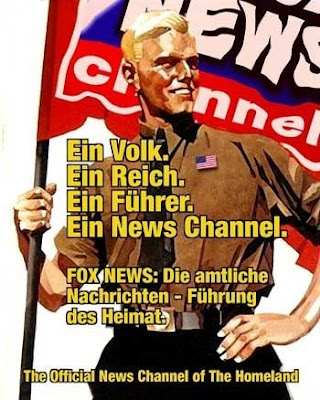 Kilmeade and two colleagues were discussing a study that, based on research done in Finland and Sweden, showed people who stay married are less likely to suffer from Alzheimer's. Kilmeade questioned the results, though, saying, "We are -- we keep marrying other species and other ethnics and other ..."

At this point, his co-host tried to -- in that jokey morning show way -- tell Kilmeade he needed to shut up, and quick, for his own sake. But he didn't get the message, adding, "See, the problem is the Swedes have pure genes. Because they marry other Swedes .... Finns marry other Finns, so they have a pure society."

You know, "species" may very well have been a slip of the tongue. But when Kilmeade went on about "pure societies", he showed where he was really coming from. Sieg fuckin' Heil, Brian.

It's like the GOP's propaganda arm isn't not even trying to disguise the racism any more. Which is probably a good thing, in the long run. At least we know what they are.

As for me, I recall the inspiring words of another winger: John Winger as played by Bill Murray in "Stripes":

We're all very different people. We're not Watusi. We're not Spartans. We're Americans, with a capital 'A', huh? You know what that means? Do ya? That means that our forefathers were kicked out of every decent country in the world. We are the wretched refuse. We're the underdog. We're mutts! Here's proof: his nose is cold! But there's no animal that's more faithful, that's more loyal, more loveable than the mutt."

Thanks to Hellion Randy Johnson for the heads up.

From Confessions of an Idiosyncratic Mind:

Benjamin Leroy and Alison Janssen have announced their departure from crime and literary fiction publisher Bleak House Books in Madison, WI to launch their own venture, Tyrus Books. Leroy founded Bleak House in 2001 and the company was sold to Big Earth Publishing in 2005. Tyrus's inaugural list has three titles - novels by Peter Gadol and Michael Lister and an anthology of crime short stories edited by Ed Gorman & Martin H. Greenberg - that were originally part of Bleak House's fall catalog; Tyrus will publish the titles as scheduled.

Email ThisBlogThis!Share to TwitterShare to FacebookShare to Pinterest
Labels: books, Friends O' Mine

The Torch is Passed to a New Generation

On Facebook, Young Republicans argue about whether or not it's okay to call black people "coons."

I wonder which side will win.

Y'know, most of us figured the answer to that question a while ago, but y'know, baby steps.

Email ThisBlogThis!Share to TwitterShare to FacebookShare to Pinterest
Labels: GOP racism, why we fight

Criticizing a bubble-headed beauty queen for her public stance on gay marriage: A violation of said bubble-head's First Amendment Rights.

Threatening to sue bloggers and journalists who speculate about your bizarre and vaguely explained abdication of your elected office: A-OK, you betcha!

Governor Wilma needs to read her Constitution, not to mention New York Times vs. Sullivan.

This Independence Day weekend, remember to be thankful for the electoral process that kept this crazy person from being a heartbeat away from the Presidency. And be thankful as well that we don't have someone in the White House who'll walk off the job in a huff if some blogger or some Republican says something nasty about a member of his family.

(Warning: some of the stuff at those links is pretty raw. Much, much worse than the photoshop on some Alaskan political blog that apparently helped drive Winky Wilma from office. Said image is apparently some sort of in-joke understood mostly by Alaskans).

UPDATE: Thanks to Oliver Willis, here's a reminder of Governor Palin's advice to Hillary Clinton about unfair criticism: "Plow through! Quit whining!"

In My Little Town

Hardly a day goes by in Carthage lately that you don't see someone with a "No Downtown Detention Center" sign in his yard or someone marching with a similar sign on the lawn of the old courthouse.

They're protesting the county's plan to expand the current jail by adding 150 beds, utilizing land bought from my neighbor Johnny Grimm. The plan also proposes moving the Sheriff's office out of its current crowded rabbit warren in the ground floor of the county courthouse to the new expanded facility.

I confess, I'm still puzzled by the protests. After all, we've had a jail in the downtown area for as long as I can remember.

Heck, I've heard that the little bitty brick building under the water tower behind the Courthouse Square Mall used to be the county jail, and that's about as downtown as you can get in Carthage. (By the way, let me know if that story's true. I'm always interested in my town's history.)

Anyway, we've locked up the county's miscreants and alleged miscreants in a downtown facility for years now, and no one's voiced any real concern. Certainly, no one can deny that the current jail, not to mention the Sheriff's Office, are straining at the seams of their current facility like a fat guy after a big dinner at the Pik n' Pig. So what's the problem?

A friend of mine in law enforcement has a theory that the county made a tactical error when it dubbed the new facility a "detention center" rather than the more plain "jail." A "jail," after all, is where Sheriff Andy Taylor let the lovable drunk Otis sleep off his weekly bender. A "jail" is something you'd hear about in a country song. You know, where Jimmie Rodgers' friend Ramblin' Bob (that rascal) got locked up for "playing cards and a-shooting dice."

Well, maybe my friend is right. But I've got to think that people realize a detention center and a jail are the same thing, and they hold the same types of offenders and alleged offenders. (I hate to keep belaboring that last point, but keep in mind what they say at the beginning of "Cops": "All suspects are innocent until proven guilty in a court of law.")

I'm sorry, neighbors, but it just seems a little late to be freaking out at the idea that criminals and those accused of crimes are going to be housed in downtown Carthage. It's not, after all, as if convicts are going to be running around loose.

If that's suddenly a major concern, then we should probably move the courthouse somewhere else, too. Not to mention the probation offices, the DA's office, and while we're at it, the Sheriff's department. Because when the accused and the convicted come to those places, they're not behind big steel doors locked with big steel keys, the way they are when being held in the jail.

Of course, we're not going to move those institutions. The main industry in this town, its reason for being, is county government. We are, after all, the county seat. That's why they put the courthouse way up on that hill, the highest point for miles around, looking out across the rolling landscape over the other towns of Moore County: because, since time immemorial, men have put their seat of government on the highest point they could find.

And where you have the seat of government, you have the place where justice is dispensed (at least that's what we hope). It just makes sense to put all of the places where that happens--courthouse, sheriff's department, and jail--as close to one another as possible.

Any other way becomes a security nightmare worse than anything you're going to have by putting a jail right next to where we already have one.