It’s gratifying to see how, even in the cold, dark depths of winter, the Republican Party continues to bring that warm glow of love and unity into our national discourse. It’s not for nothing that I call them the Party of Love.
Take, for example, washed-up rocker and prospective GOP presidential candidate Ted Nugent, a guy who really knows how to bring the love, and we’re not just talking about bringing it to the underage girls he brags about having sex with (in one case, he talked his 17-year-old girlfriend’s parents into granting him legal guardianship because she was too young to marry. He was 30 at the time).
Recently, in an interview with Guns.com, The Nuge was fairly exploding with love, referring to President Barack Hussein Obama as a “Chicago communist-raised, communist-educated, communist-nurtured subhuman mongrel,” and avowing that “America will be America again when Barack Obama, Eric Holder, Hillary Clinton, Dick Durbin, Michael Bloomberg and all of the liberal Democrats are in jail facing the just due punishment that their treasonous acts are clearly apparent.”
In case you didn’t get that, the “just due punishment” for treason is death, and Nugent was therefore calling for the execution of anyone who disagrees with him, after holding up a “Ted Nugent For President” bumper sticker and declaring that his election would be “the perfect ballot of freedom.”
Because nothing says “freedom” like demanding the killing of political opponents, and nothing says “love” like referring to a president of a different race than you as a “subhuman mongrel.”
Before you write Mr. “Wang Dang Sweet Poontang” off as just some fringe nutter, remember that this is a guy whose endorsement Mitt Romney (remember him?) actively sought. He’s a frequent guest on Sean Hannity, who refers to him as “a friend.” He attended last year’s State of the Union address as the guest of Rep. Steve Stockman. A violent racist may not be exactly the Republican mainstream, but the Republican mainstream caters to him. It must be all the love.
Actually, when you really look at it, Nugent does have some advantages in the presidential race. For one thing, he’s been visited by Secret Service agents enough times after his inflammatory screeds that he probably already knows most of the agents by name.
More important, he’s already mastered that most vital of wingnut skills: When you’ve talked yourself into a corner, distract the listener by bringing up some long-discredited right-wing lie about Benghazi.
Noting that his comments might be considered “inflammatory,” Nugent said, “I would call it inflammatory speech when it’s your job to protect Americans and you look into the television camera and say what difference does it make that I failed in my job to provide security and we have four dead Americans.” The guy’s got the Benghazi Dodge down, I tell you.
Also on this week’s Republican Love Parade, we have Florida House candidate Joshua Black, who decided to celebrate Martin Luther King Jr. day by calling for the president to be hanged.
“I’m past impeachment,” Black said on his Twitter account. “It’s time to arrest and hang him high.”
Black, a former “street preacher,” also took to his Facebook page with a rather novel take on the Gospels to argue that Jesus would back him up on this: “This would be exactly what the president has done to others, and, as Jesus said, ‘The measure ye mete, it shall be meted to you again.”
When a fellow Republican responded, “You aren’t seriously calling for the killing of Obama, are you?” Black stood his ground like a good Floridian: “Execution is the appropriate punishment for traitors. #BenedictArnold #ReadAmericanHistory #criminalpoliticians.”
I have to confess, that last one made me a little nostalgic. During George Dubbya’s Wacky Iraqi Adventure, another member of the Party of Love took me to task in an email for my audacity in questioning the Dear Leader’s strategic wisdom: “They hanged Benedict Arnold, you know.”
This managed to be both vaguely threatening and historically inaccurate at the same time, since Arnold wasn’t hanged. He died a rich man in London.
But then again, this is the party who had one of its leaders insist that Paul Revere warned the British, and whose spokespeople complain that too many Americans don’t know that “some guy in Boston got his head blown off because he tried to secretly raise the tax on tea.” Who cares about factual accuracy when you have the kind of love in your heart that tells you Jesus wants you to execute the president and everyone who supports him?

The GOP: Can’t you just feel the love? I can. I have. And that’s why I stay as far away as I possibly can.
Posted by JD Rhoades at Saturday, January 25, 2014 0 comments

Calling All Wingnuts: The "Both Sides Do It" Challenge.

Whenever anyone points out some racist, violent, misogynistic, or just plain nutty statement like any of the ones below: 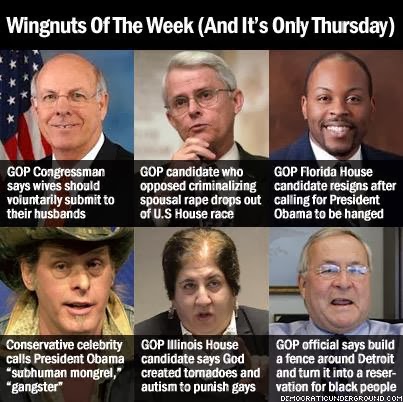 It's not long before someone comes along at says "well, Democrats say crazy shit too." And every time, it's usually one of a very few statements, like the one about Guam tipping over or some WTF? statement from Maxine Waters, or Barack Obama's "57 states" stumble.

So here's the challenge: can anyone provide me with an example of any Democratic politician calling for the killing of political opponents, advocating allowing rape inside of marriage, claiming some disaster or disease is God's punishment for not following their religious belief, or calling for a city to be turned into an internment camp? Feel free to respond in comments.


“Republicans are the ones who tell you government doesn’t work,” political humorist P.J. O’Rourke once said. “Then they get elected and prove it.”
North Carolina Health and Human Services Secretary Aldona Wos is just the latest example.
This past week, Wos appeared before a legislative oversight committee to explain what’s been going on in her troubled department. Lawmakers wanted to know why, for example, 49,000 children’s Medicaid cards were mailed out to the wrong addresses, and why the state food stamp program was so far behind, with up to 27,000 families caught in backlogs of up to three months.
(Ironically, the computer program that’s supposed to help speed up the processing of applications is called FAST. Apparently, FAST wasn’t being used to mean “speedy.” It was used in the sense of “you don’t eat.”)
Things have gotten so bad that the U.S. Department of Agriculture wrote a letter to Wos calling the food stamp delays “completely unacceptable” and “a failure on the part of North Carolina.”
While Madame Secretary made the required pro-forma apologies for the ever-expanding disaster that is her DHHS, she did come up with one humdinger of an excuse: She blamed “the implementation of the Affordable Care Act.” It’s a “huge issue” in North Carolina, Wos told the committee.
Poor thing. I mean, we’ve only had since March of 2010 to get ready. And what, may I ask, in the Affordable Care Act has squat-all to do with food stamps? Further, what in the ACA does Madame Secretary claim is responsible for mailing 49,000 Medicaid cards to the wrong addresses?
I do know one thing, however, and that’s that I’m going to start using the “Obamacare excuse” every chance I get. Like so:
WIFE: Honey, did you roll the trash can up to the curb like I asked?
ME: Sorry, Pookie. I was so bumfuzzled by the implementation of the Affordable Care Act that I just forgot.
JUDGE: Mr. Rhoades, what is your client’s defense to driving with a revoked license and possession of marijuana?
ME: Your Honor, we feel the implementation of the Affordable Care Act is to blame.
JUDGE: Say what?
ME: My client spent so much time trying to sign up for Obamacare that he forgot to renew his license, and it upset him so bad he just needed some kind of mental relief.
JUDGE: Does that also explain why he was riding a motorcycle down Broad Street with no pants on?
ME: No, Your Honor, that was the fault of the administration’s cover-up of what really happened in Benghazi.
I’ll let you know how it works.
Look, folks. Every state in the union has had to implement the ACA. Somehow other directors of Health and Human Services seem to be getting their jobs done without whining that “Obamacare makes everything so haaaaaard.”
You’ll also notice that the states where the ACA is working best are the ones where the government hasn’t been trying to undercut it from the get-go. You want to know why the DHHS is so screwed up? Because the Republicans want it that way.
When you have an administration whose political base is distinguished by its virulent contempt for people who use programs like Medicaid and food stamps, maybe it should come as no surprise when that administration staffs the agencies responsible for carrying out those programs with political hacks like Wos whose main “qualification” has been their skill at political fundraising.
It should come as no surprise when that same hack goes on to pack the agency with inexperienced 20-something former campaign workers suddenly making 80-plus thousand taxpayer dollars a year.
These people don’t give a rat’s hindquarters about helping the poor. They think the poor deserve to suffer — that is, when they condescend to think about them at all. The McCrory administration knows that, among their core voters, there is no political downside at all to making needy people wait for food stamps or screwing up children’s Medicaid. And they see it as even better politically if they can blame their own dismal failures on Obamacare or on the previous state administration (ironic, that).
The USDA letter mentioned above told Wos, “We have grave concern for the low income people of North Carolina who are waiting for assistance.” The problem is, the Republicans just don’t, no matter how much lip service they give to the idea.
There’s an old saying from AA that “the program works if you work the program.” But if you elect people who don’t think programs work, don’t be surprised when they don’t work them, and don’t be surprised when, like Wos, they fail at their jobs.
Posted by JD Rhoades at Sunday, January 19, 2014 0 comments