Prince of Peace, Lord of War


It seems that God and guns have become inextricably intertwined in the minds of some Americans, to the point where “Praise the Lord and Pass the Ammunition” may be turning from a humorous World War II novelty tune into an actual hymn.
For example, a couple of churches have made the news recently for giving not alms to the poor, but arms to their parishioners. Grace Baptist Church in Troy, N.Y., even advertised its giveaway of a brand-new AR-15 with a quote from John 14:27: “My peace I give unto you.” 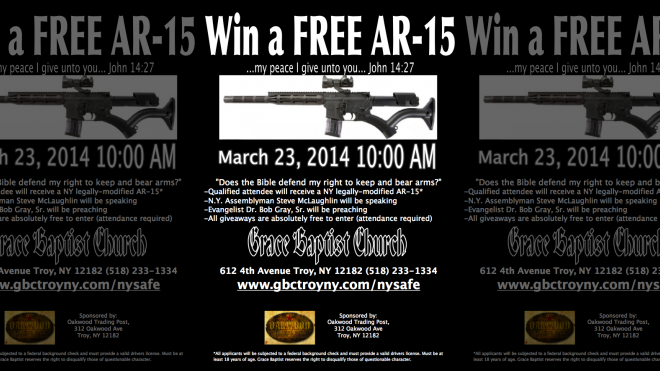 Fear not, however, that the arms may fall into the hands of the iniquitous. According to the story in The Albany Times Union, the winner would have to pass a background check before receiving his gun. One would think God’s approval shown to the winner of the drawing by having his ticket pulled would be better than a background check, but I guess they need to render unto Caesar and all that.
Meanwhile, down in Paducah, Ky., the Lone Oak First Baptist Church held a big steak dinner at which 25 guns were raffled off.
“I brought a gun with me tonight,” Pastor Chuck McAlister told the congregation. “I know that’s controversial.”
It also suggests a certain lack of trust in his flock, but whatever.
“This issue is not guns,” McAlister told Fox News Detroit’s Charlie McDuff. “The issue is men’s hearts. Men who have their hearts changed through a personal relationship with Jesus Christ will handle guns responsibly.”
Men, one supposes, like Austin Ruse of the Catholic Family & Human Rights Institute. According to Ruse’s bio, he has briefed a variety of government officials, including “members of the U.S. House and Senate,” as well as “White House and National Security Council staff.” He has “appeared on a number of national cable network programs discussing U.N. and Catholic issues, including news programs on CNN, CBS News, MSNBC and Fox News.” His writing career has included publication in right-leaning magazines and “on sites such as the National Review Online, Weekly Standard, Human Events, Touchstone, as well as newspapers around the world.”
So last week, Ruse went on American Family Radio and had this to say about a story of the Duke student who revealed that she’s putting herself through college by appearing as an adult-film actress:
“My daughters go to a little private religious school, and we pay an arm and a leg for it precisely to keep them away from all of this kind of nonsense. I do hope that they go to a Christian college or university and to keep them so far away from the hard left, human-hating people that run modern universities, who should all be taken out and shot.”
Got that? This good Christian, this adviser to legislators and presidents, whose organization’s mission statement says its purpose is “to defend life and family,” says that people with whom he disagrees should be “taken out and shot.”
This is a version of Christ’s love with which I am not familiar. Aren’t you guys glad that this believer is probably well-armed?
In fact, it seems like this whole idea of Jesus as the Prince of Peace is a little too wimpy for a lot of the folks at the American Family Association, owner of the above-mentioned American Family Radio.
The AFA’s executive vice president, William (Jerry) Boykin, a former lieutenant general in the U.S. Army, recently told an audience at the Pro-Family Legislators Conference in Dallas that when Jesus returns in triumph, “that sword he’ll be carrying when he comes back is an AR-15.” As the crowd laughed, he reiterated: “The sword today is an AR-15. If you don’t have one, go get one. You’re supposed to have one. It’s biblical.”
Funny, one would think the Son of the God who “thunders with his majestic voice, and … does not restrain the lightnings when his voice is heard” (Job 37:4) wouldn’t need small arms. And it’s true that Jesus did say “all they that take the sword shall perish with the sword,” and something about “turning the other cheek,” but really, who is this biblical Jesus anyway that he can argue with a former lieutenant general who tells us that owning an assault rifle is a biblical imperative?
More and more, it looks like America’s gun aficionados are remaking God in their image, and that God of theirs sure does like guns. In a few years, will crossed rifles take their place on the altar beside the actual cross?
You might think it’ll never happen, but I never thought I’d see churches giving away guns, either.
Posted by JD Rhoades at Sunday, March 23, 2014 1 comments