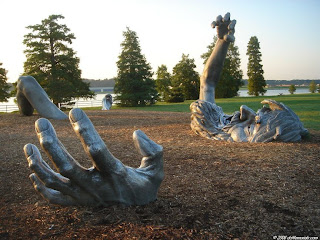 Well, it's that time of year again.

The trees are blooming, the birds are singing, the sap is rising, and the minds of most Americans turn to thoughts of packing up the car, kenneling the pets (or getting a neighbor to come by and feed them), and getting away from it all for a few days. So, as we always do about this time every year, we bring you our guide to American's weirdest vacation destinations:

*Ramp festivals: I regret to say that, by this time of year, most of the South's Ramp Festivals have already taken place. But you can still make the one in Crossnore, N.C., on May 24 and 25.

What's a Ramp Festival, You may ask? It's where you go to eat a whole mess of ramps, silly. And what's a ramp? A ramp is a kind of wild onion, also known as the wild leek. They grow, according to Wikipedia, from South Carolina to Canada, and they've been a staple of the diet in Appalachia for hundreds of years.

The taste has been described as like a "garlicky onion," and there are all sorts of ways to prepare them Unfortunately, though, no matter how you fix them, there's one problem with ramps: They make you smell bad.

Now, it would seem to me that, if you were going to have a festival celebrating something like this, it would be to proclaim, "Thanks be to God that we have a modern food distribution network, so we no longer have to eat something that makes us smell like Satan's gym socks," but tradition is a powerful thing.

As for me, the only way I'm getting near one of these shindigs is to approach it from upwind.

*The Screaming Giant: If you've got a hankering to see a giant metal statue of a screaming bearded man trying to claw his way out of the earth, I'm afraid you're going to have to drive a little farther than you used to.

"The Awakening," a profoundly disturbing statue by sculptor J. Seward Johnson Jr., was originally placed in Washington's Hain's Point Park back in the Reagan years. Apparently the Park Service was never all that crazy about it. Go figure.

In February, a billionaire developer named Milton Peterson laid out 725,000 simoleons for the frantic colossus and moved it to his ritzy new development in National Harbor, Md., where it writhes in all its frozen, mute agony next to the marina and restaurants. Because, you know, there's nothing I want to see more while I'm scarfing down my crab-cakes than a titanic statue of a guy who looks like he's been buried alive. Rich people are weird.

*World's Largest Ball of Twine: It amazes me that, for all the years I've been doing this feature, I've never done a bit on the most classic of all roadside attractions: the world's largest ball of twine. Sisal twine, to be exact.

Well, wait no longer, and my apologies for the delay. It's in Cawker City, Kan. It weighs almost nine tons. It's not particularly interesting-looking. But it is an awful lot of twine.

* The Burger King Vampire Peacock Memorial: In June 2007, a real, live peacock wandered into the parking lot of a Burger King in Staten Island, N.Y., and was promptly beaten to death before a horrified crowd by an insane homeless man who announced he was killing a vampire.

Now, something that weird can't go without being memorialized in some way. So a retired shop teacher from Staten Island named Charles Johnson decided he'd carve a life-size peacock out of elm, decorate it with actual feathers from his own peacocks, haul it to New York from his new home in Virginia, and donate it to the Burger King.

And so he did, and there it sits, in the BK at the corner of Page Avenue and Amboy Road. You can see it to this day. Watch out for insane homeless guys. And the fish sandwich. That thing is nasty.

*The Martian Invasion Memorial: Remember when the Martians landed in 1938? The people of Grover's Mill, N.J., sure do, or at least they remember the hubbub caused by the Orson Welles radio hoax that convinced Americans that nasty Martians with heat rays had landed in their little corner of rural Jersey before being felled by the common cold.

So they've put up a plaque showing a pre-morbid-obesity Welles declaiming into a microphone while a terrified family cowers before the radio. Unfortunately, the water tower that local rubes blasted with shotguns after mistaking it for a Martian war machine has fallen to ruin.

OK, it may not sound like much, but what else are you going to do if you find yourself in Grover's Mill, N.J.?


Special question for blogreaders: Where's the weirdest place you've ever been on vacation?
Posted by JD Rhoades at Sunday, May 18, 2008

Email ThisBlogThis!Share to TwitterShare to FacebookShare to Pinterest
Labels: columns, safe and sound

I remember seeing the statue of the buried guy on the annual eighth grade field trip to DC. You know, as a thirteen year old I couldn't figure out what the hell that was about, but now I get it.

The poor guy was buried in political bullshit...

Weird is relative. I live in California after all.

But there is one standout. The disintegrating Bedrock City in Arizona.

A Flintstones themed campground in the middle of nowhere. After a weeklong family road trip to the Grand Canyon, this was more surreal than any 6 year old should expect to endure. The only person there was a creepy maintenance worker.

The buildings are run down. The insides covered in a fine layer of desert dust. As if there had been a massive Bedrock evac from some horrific disaster.

Ramps might be the new basic with the looming food shortages.
Gainesvile, Florida. Man, there's nothing to do there except watch their basketball team.

The weirdest place I've been?

The United States of America :>)

I'm a big fan of the Luray Caverns in Virginia - weird, a little, interesting - a lot.

Warning: Somebody got Flash for Christmas.

The weirdest place I ever went was a KOA campground near Nashville. About 17 years ago we were on vacation and wanted to visit some friends. We made sure to call for a reservation so we'd have a site when we got there late.

Since it was dark when we arrived, we just put up our tent and went to bed. The next morning when we looked out of our tent, we saw only a few sites were occupied...by run-down RVs that were obviously occupied year-round. Old refrigerators and junk cars sat all over the place. Although we had planned to stay four nights, we hightailed it out of there as soon as we packed up our tent.

It was the nastiest, scariest, Deliverance-type campground I'd ever seen!

I'm amazed that you didn't think to include the Star Trek festival in Riverside, Iowa -- the town which has proclaimed itself "the future birthplace of Captain James T. Kirk".

I've never been there, but cherish hopes of going one of these years.

The 4th of July parade in West Athens, ME.

I went to a ghost town in Arizona and like Stephen's weird-ass campground, there was only one cranky old man around who had grown up there, moved away, and then moved back.

He told us stories about the buffalo soldiers from Fort Huachuca who stole a guy's watch.

"They's worse than the Indians," he said.

And now we know why he lives alone.

I just saw this one, and figured I'd pass it along:

What are the two reasons that it's hard to solve a redneck murder?

2) There are no dental records.

Thanks for the link to my King of Stink website. I got here through a link on my stats. Too bad you don't enjoy the smell of Satan's gym socks!

Welcome to our wow Gold and store. We are specilized, professional and reliable website for selling and service. By the wow power leveling same token,we offer the best WoW service for our long-term and loyal customers You will find the benefits and powerleveling value we created different from other sites. As to most people, they are unwilling to spend most of the time grinding money for mounts or repair when they can purchase what they are badly need. The only way is to look for the best place to wow powerleveling buy cheap WOW gold. Yes! You find it here! Our WoW Gold supplying service has already accumulated a high reputation and credibility. We have plenty of Gold suppliers, which will guarantee our wow gold delivery instant. Actually, we have been getting tons of postive feedbacks from our loyal customers who really appreciate our service.